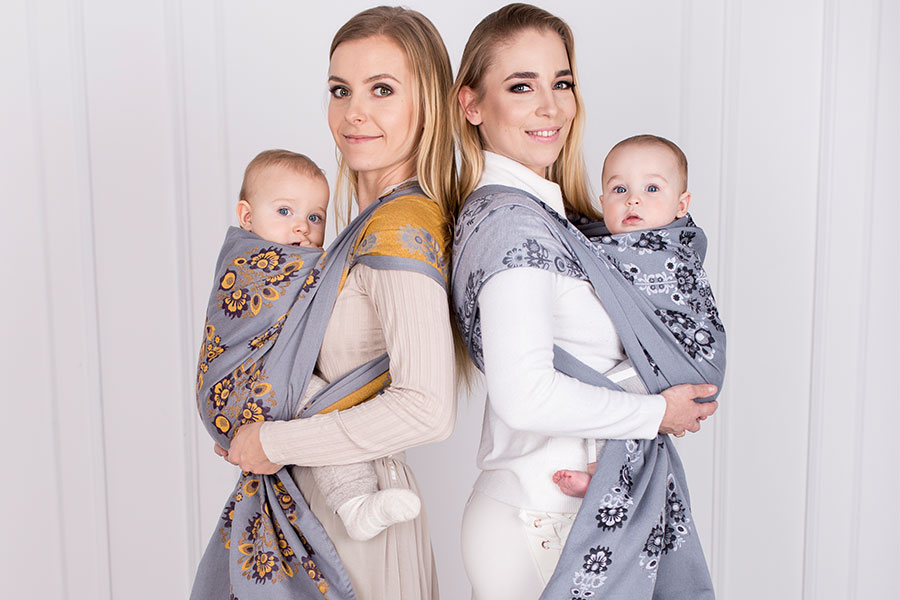 At Natibaby we have a passion for folk patterns. Folk patterns are beautiful, decorative and joyful, they are perfect for wraps and baby carriers. We designed many folk motifs together with groups of interested mothers who wanted to show their regional affiliation and thus promote their surroundings and unique culture. We present the results in this post.

So, we'll start our journey across the map of Poland following our favorite patterns from the north - welcome to Kaszuby. Our Kaszuby and Kaszuby Night patterns are based on the Kaszubian embroidery motifs. The history of embroidery is closely related to the orders located in Kaszuby. In the old days, nuns taught young women from wealthy families in convent secular schools, among other activities, they were taught to sew and decorate clothes with embroidery. The students were to draw on the design of other regions in which the Norbertine and Benedictine convents were located, but they also had creative freedom, thanks to which the Kaszubian embroidery was created. Their characteristic feature is the use of several basic colors: black, red, green, yellow and blue in three shades. The most common are floral motifs taken from the surrounding landscapes - clovers, lilies, forget-me-nots, roses, pansies, cornflowers, carnations and foreign motifs, imposed in monasteries - tulips, acanthus, palmets, pomegranate flowers. 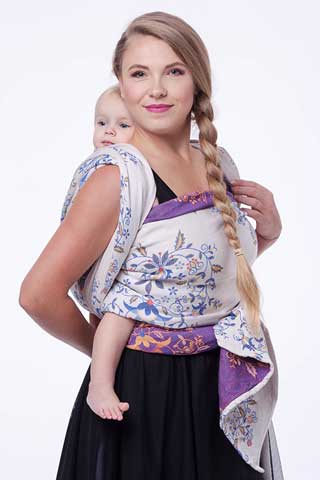 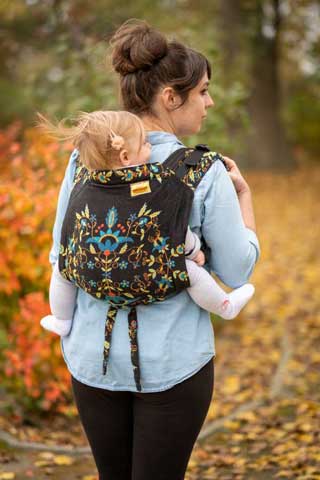 Wandering down the map, we stop in the middle of Poland and visit the Łowicz region. The first Natibaby wrap pattern inspired by Polish folk art was created in 2013. Within a few years, almost 20 color versions were created! The combination of a gray background with a colorful pattern enjoyed enormous popularity. Popular folk designs originally embellished everyday products and outfits for special occasions. Pottery, ceramics, leathercraft, foundry, blacksmith and textile products were decorated with such patterns. The patterns were woven and embroidered to form a beautiful, delicate lace. Łowicz patterns have become very popular thanks to their unique composition and repetitive floral motifs as well as the characteristic representations of roosters, which originally dazzle with their richness of colors. Our versions focus on several color combinations, which, properly selected for the background color, emphasize the composition and unique drawings. 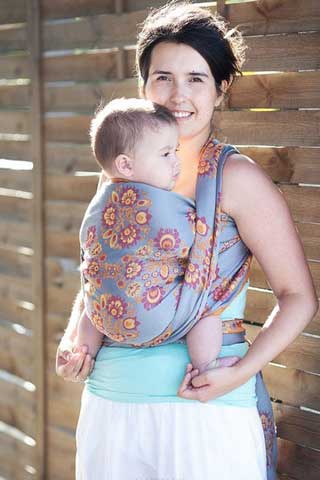 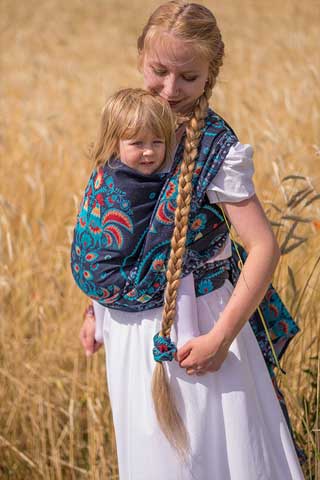 Dancing close to the heart ... A few words about Kroszonka and Opole Folk 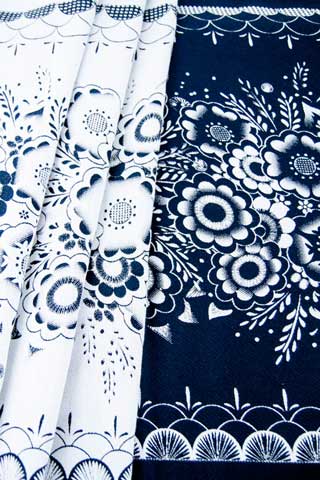 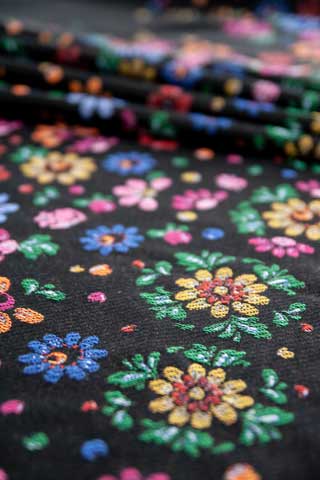 Turning west, we reach the Opole county. This region boasts a unique technique of creating Easter eggs. Kroszonka is a way of decorating eggs (eggshells) for Easter, by "scratching" patterns on a dyed egg shell. This way, engravings with floral motifs are created: flowers, palms, leaves, etc. Traditional Kroszonki (Polish plural for “Kroszonka”) were monochromed, thanks to which the composition stood out in the foreground. And it's amazing, expressive and rich, tiny elements create intricate combinations. Engravings create the illusion of three-dimensionality and you can easily distinguish individual plans. Creating a symmetrical and coherent composition requires masterful precision, and the effect is amazing. Kroszonki have become so popular that new export goods have been sought for these ornaments. It was porcelain, which was painted in small floral patterns inspired by the Kroszonka, but compared to original Kroszonka, the patterns were multi-colored. 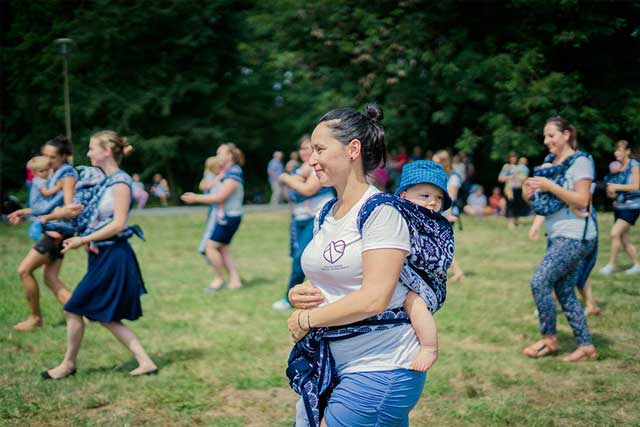 Members of the "Zamotani - Close to the Heart" association from Opole recorded a joint dance of mothers wearing wraps and baby carriers in a beautiful Kroszonka pattern, for the Tesco competition. The girls looked great. The competition was another opportunity to meet, dance and spend time actively with the kids. They also presented a picnic dance that took place in the summer in Opole.

We reach the south of Poland, particulary areas around the Beskids. Folk costumes of this region are very beautifully decorated with floral motifs. The composition is not overloaded, the space is definitely felt, and the patterns aren’t overwhelming. Flower stalks twist neatly to form a harmonious unity. The laces that we drew our inspiration from are delicate, the flowers light and small, sometimes barely noticeable - minimalism in this rendition is the quintessence of elegance. 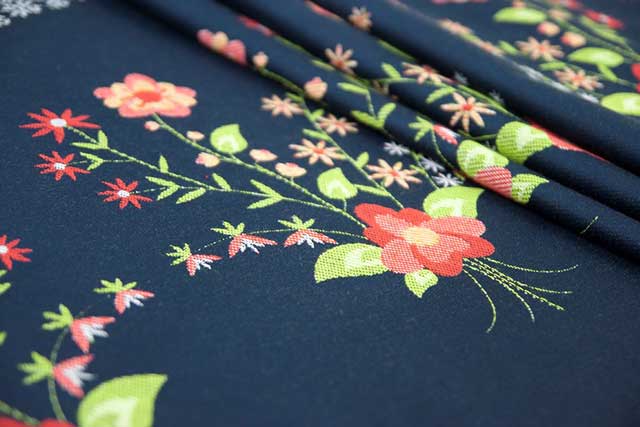 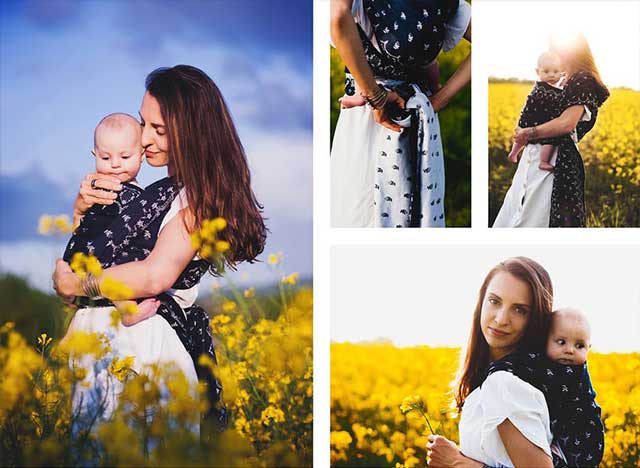 Pikno wrap in a Mountaineering version

We’re welcomed by the mountains, and with them come changeable and unpredictable weather. Native Mountaineers were always prepared for such weather and therefore wore scarves. Barankula, also known as Baraniato, was an expensive, decorative scarf with fringes, usually black and intended to be worn in winter. The inspiration for creating this pattern were Mountaineering scarves, but we delved into the subject further and the names of individual color versions were taken from the Mountaineer's dialect. The patterns were named Corny (Black), Pikno (beautiful), Hruby (fat, rich), Biola (white). The composition is dominated by floral motifs, even in folk costumes for men. 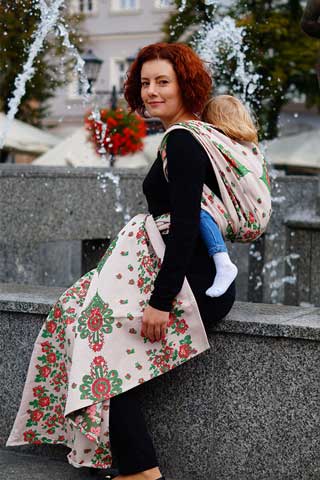 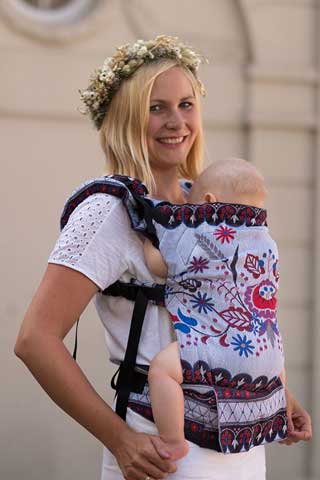 As you can see, wherever you go, Poland is full of inspiration. You don't have to look far. Poland has a very rich culture and a long history, so it's not surprising that individual regions can boast of their own patterns and motifs that were to distinguish the inhabitants of a particular area from others. Many such designs have gone down in the history of design, and several of them have inspired us to create fabrics for our wraps, baby carriers and accessories. By drawing the best from our culture, we are keeping it alive so it’s not forgotten by our children. We will joyfully continue to create baby wrap and carrier patterns inspired by Polish design, as we have done so far, hoping they will enchant the rest of the world.